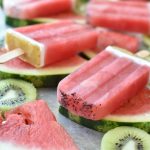 The most refreshing popsicles ever...watermelon kiwi popsicles. We love these colorful delicious popsicles.

If you'd like those cute little tiny kiwi seeds to be more dispersed throughout the red layer of the popsicles, don't mix them in at the beginning when it's a liquid state, add them at about 30 - 45 minutes into the freezing time. Also add the popsicle sticks in at this time too. This way the sticks will be more centered in the popsicles. Also give the red layer a little mix with a wooden skewer at this time. The red watermelon color seems to rise to the top when freezing. If you give it a little mix 45 minutes into freezing the red color will be more even all over.